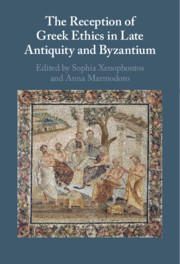 Around the mid-thirteenth century, in the short-lived empire of Nicaea, the enlightened prince and philosopher Theodore II Laskaris was confronted with the dreadful death of his wife Elena. The period of mourning gave rise to his Moral Pieces (Ἐπιτομαὶ ἠθικαί), a collection of twelve essays of a profoundly ethical character, focusing on the instability of human fate as opposed to the durability of genuine virtue. What marks the collection as a whole is the overarching despondency at the loss of Elena, which leads to the discussion of broader concerns about human existence, happiness and morality. While placing the characteristics of human soul and nature into a Christian context (e.g. essay 1), Theodore is also keen to adopt Platonic and Aristotelian understandings of the soul and intellect, bringing them into alignment with his emphasis on spirituality addressed in his account. But it is perhaps the peculiar style of his moralism that stands out in passages such as the following:

Large is the sea of life and hard to cross, because the man who powerlessly sails on it is utterly unable to find harbor. For he is constantly disturbed by the motion of the winds. According to Homer, “mortals are weaker than everything,” (Od. 8.169; 18.130) because they have in themselves continuous misfortunes. For they are in every way weaker than everything, because everything in humankind has come to be nothing at all. For as everything in humankind is turned upside down and altered, the inconstancy of the affairs of life becomes evident, because also the properties of the soul, being changed, depart from their prior state and do not remember anything they cherished. For food, luxury, comfort, servants, honor, pomp, and everything else mortal nature is accustomed to value are of no benefit and use; none of them is for the sake of virtue and edification. The soul hardens and enjoys none of these things since they have no permanence. For they disappear with time and are considered to be nothing on account of fortune, because when they pass away unexpectedly, they bring sorrow rather than joy. Wretched nature, what will you do? You have been allotted a mixed composition beyond comprehension, you have earned a noble name in that you are called rational. You abound in rational thoughts and have such a divine spirit, but lo and behold, you are unluckier even than senseless objects when you incur these horrible corruptions caused by time.