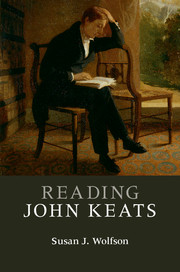 Keats seems wired to write poetry in discovery, turning themes, allusions, and formal traditions (stanzas, couplets, meters) into workouts with what he's been reading, has in his head, feels on his pulses. At the same time, he was acutely sensitive to the cultural warfare and social gate-keeping impinging on his vocational passion. Here he was in the summer of 1816, without parents but with good friends, counselors, and sponsors; without a university education and connections, but qualified for a career as a general medical practitioner. In October, he passed his apothecaries examination. But he cast his lot with poetry, wanting to join this company of men. This was the month he wrote his first really great poem, spurred by a transformative event of reading a man's vigorous epic, his sonnet, On First Looking into Chapman's Homer.

Clarke had on loan a gorgeous 1616 folio edition of George Chapman's late sixteenth-century translation, and was eager to share it with Keats. They stayed up all night with it. Their excitement played off the eighteenth century gold standard, Alexander Pope's Homer, which Clarke also laid out, for comparisons. Here's one passage – Pope's Odysseus, tempest-tossed and shipwrecked, staggering towards land:

fainting as he touch'd the shore,

He dropp'd his sinewy arms; his knees no more

Perform'd their office, or his weight upheld;

From mouth and nose the briny torrent ran;

And lost in lassitude lay all the man,

Deprived of voice, of motion, and of breath,

The soul scarce waking in the arms of death.

You can see Pope's technical precision: strong masculine rhymes, mostly regular iambs with measured medial pauses, the syntax fit to the line. Only “no more / Perform'd” runs over, with a nice pause at the end of suggest not just weak but destroyed knees.