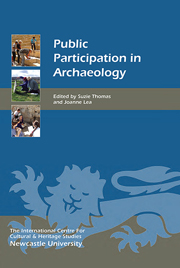 from Public Participation in Archaeology Through Education

Suzie Thomas
Affiliation:
University Lecturer in Museology at the University of Helsinki
Joanne Lea
Affiliation:
Educator with the Trillium Lakelands District School Board in Ontario, Canada

The inspiration for this chapter has come from the observations of several years of public participatory archaeology seminars and workshops in both the UK and Canada. The audiences of these sessions have varied from school groups aged between 12 and 19 to prospective archaeology students, their families and undergraduate archaeology students. This chapter will describe the development of three different workshops, their trials and possible future developments. The ultimate goal is to share good practice and encourage other archaeologists to seek out public interaction as a means of enriching both the discipline and the public's understanding of archaeology.

Archaeology has become increasingly popular in the media. But the image that is created is not always consistent with the reality of the discipline. However, simply flooding the media with academic-sponsored information is far from the solution. An additional problem, affecting not only archaeology but also other minority departments, is the retention of students and the lack of preparation of these students for the independent nature of university learning. With these two issues in mind, a proactive solution was developed. Using enquiry-based learning (EBL) as a means to facilitate student-directed learning, three different workshops were developed and tested.

The first workshop was part of a project funded by the Centre for Excellence in Enquiry-Based Learning (CEEBL), located at the University of Manchester in 2007-08. The second workshop was part of an even larger project directed at embedding enquiry-based learning into the archaeology curriculum at the University of Manchester, again funded by the CEEBL in 2009–10.