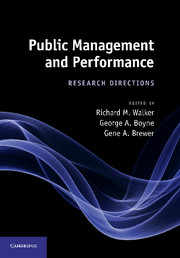 9 - Performance management: does it work?

The idea that organizations should measure and actively manage their performance is a core element of recent public sector reforms in many nations, and is strongly encouraged by international bodies such as the OECD and World Bank. This doctrine of ‘performance management’ has taken root not only in US federal (Milakovich 2006), state (Moynihan 2006) and local governments (Krane 2008) but also in national government agencies in China (Chan and Gao 2009), New Zealand (Norman 2002) and Western Europe (Pollitt 2005), in local governments in the UK (Boyne et al. 2004), and in former Soviet states (Verheijen and Dobrolyubova 2007). Thus it can be argued that performance management appears to be viewed positively by governments across the globe, and is believed by senior policy-makers to lead to better public service performance.

Like many aspects of New Public management (NPM), performance management has roots in public choice theory (Boyne et al. 2003). In the era before the deluge of performance indicators in the public sector, writers such as Niskanen (1971) argued that public organizations were less efficient than their private sector counterparts, partly because their performance was opaque to citizens and politicians. Only the bureaucrats knew the true cost of services, and so were able to ‘budget-maximize’, thereby pursuing their own interests rather than the public interest and reducing the efficiency and cost-effectiveness of service delivery. One policy response to this problem was to expose public agencies to competition, which was intended to reveal the price and performance of alternative providers and so pressurize the bureaucracy to deliver better results. Another response was to encourage or force public organizations to collect and publish data on their performance.