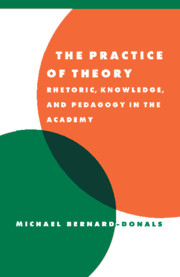 The Practice of Theory
Rhetoric, Knowledge, and Pedagogy in the Academy
Buy print or eBook[Opens in a new window]

4 - Rorty and the mirror of nature: hermeneutics and the possibility of social change

When Richard Rorty published Philosophy and the Mirror of Nature in 1979, he codified what had already become apparent – the human and the natural sciences, along with philosophy (the primary subject of Rorty's book) had taken a decided turn away from “objectivity” and “realism,” and had questioned the methodologies fundamental to the disciplines themselves. There had been rumblings of such a structural revolution early in the previous decade: Thomas Kuhn (one of Rorty's unsung heroes in Philosophy and subsequent books) had done for the sciences in The Structure of Scientific Revolutions what Rorty had done for philosophy with his book. Within two decades, normative science and positivist philosophy of science – each of which had a tradition stretching back to the early renaissance – had been overthrown, and what resulted was, depending upon how you look at revolution, either wholesale chaos in which scientists and philosophers had to rethink their centuries-old modus operandi without so much as a roadmap; or a fecund multidisciplinary soup, in which the boundaries between traditionally demarcated fields broke down to yield shared methodologies and borrowed metaphysics.

Of course, this revolution did not come overnight. Careful readers of Kuhn had seen it coming for a while. The natural sciences had not been up to the task of explaining the phenomena they took for their job to explain, not because their theories were not complex enough, but because the paradigm within which theoretizing could be done at all had become threatened by methodologies that grew up in the human sciences; and analytic philosophy, far from failing to theorize the epistemological and ontological problems it had set for itself, found instead that the very questions it had been asking were mooted by problems articulated by Foucault and Derrida and raised by others before them.