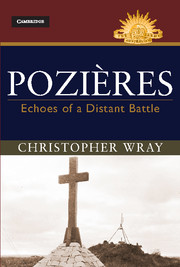 Chapter 2 - A place of sinister name and tragic happenings

Shortly after midnight on 23 July 1916, those men of the 1st Division AIF who were to form the first wave in the assault on Pozières crept from their trenches into no man’s land, and formed up in readiness for the attack. They lay in silent rows, as close as possible to the line on which the artillery barrage would fall, waiting for the order to advance. At thirty minutes after midnight the barrage crashed down onto the first line of German trenches, with the flashes of the shellfire lighting up the night sky for some 30 kilometres around the target area.

C.E.W. Bean later described the artillery bombardment as ‘famous even among the many famous bombardments on the Western Front’. To Major John Harris, waiting with his men of the 3rd Battalion in the second wave, the German front line was marked by ‘an almost continuous wall of fire, with shrapnel bursting overhead and H[igh] E[xplosive] along the line of the trench’. Lieutenant Ben Champion, waiting with his men in no man’s land, watched as ‘mortars and large shells glowed red as they fell’ while the ground beneath them ‘shook under the force of the barrage, [and] the concussion from the shellfire made men’s ears ring’. In the reserve line, Lieutenant John Bourke of the 8th Battalion believed that no description of the bombardment, however realistic, could give any idea of what it was like. Nevertheless, he tried, recording that he could feel the ground shake with the thunder of the guns, ‘while the whole battle line was lit up as bright as day with the thousands of rockets, flares, and flashlights of every colour’. It was hardly surprising that the waiting men, instead of remaining spaced apart, began to bunch together in groups, and ‘no motioning from the officers and NCOs could keep them apart’.