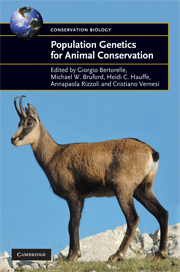 A key component of the emergence of conservation genetics as a recognisable subdiscipline of conservation biology over the last ten years has been the development of methods to genetically assess and monitor populations of endangered species non-invasively. The rapid development of methodologies for ensuring the accurate capture of molecular data from elusive, easily stressed or potentially dangerous (!) organisms and concerns over the accuracy of the data produced have prompted a number of excellent reviews on the subject in recent times (e.g. Taberlet et al. 1999; Taberlet and Luikart 1999; Piggott and Taylor 2003; Woodruff 2003; Wayne and Morin 2004). Here, we will review the issues and wide-ranging applications of non-invasive genetic analysis without focusing on the molecular technicalities in great detail.

Before the advent of non-invasive genetics and the use of animal by-products such as faeces, shed hair, feathers, bones, fish scales, teeth, etc., obtaining genetic material from wild populations was often ethically (in particular for species listed as endangered and critically endangered under CITES regulations) and logistically extremely difficult. Now such analysis is increasingly possible and the sampling of large populations without visual/physical contact is particularly beneficial for endangered species or if the species studied can transmit or are susceptible to disease (e.g. great ape species whose pathogens are often extremely similar to those of the researchers studying them). In a century where linking behaviour, social structure, dispersal and population genetic structure has become a new challenge for conservation geneticists, the development of non-invasive sampling and genotyping has provided the opportunity to explore these links and has dramatically opened new areas for research.

The characterisation of non-invasive material using molecular markers allows biologists to identify and count individuals in wild populations, identify the sex of those individuals and determine their movement patterns, infer parentage, kinship and relatedness, and assess pathogens and diet (see Kohn and Wayne 1997 for a review).