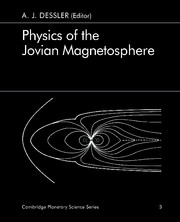 8 - Plasma waves in the Jovian magnetosphere

By
D. A. Gurnett  and
F. L. Scarf
Edited by
A. J. Dessler
Book contents
Get access

The recent Voyager encounters with Jupiter have now provided us with the first comprehensive investigation of plasma waves in the magnetosphere of Jupiter. The most striking feature of the Jovian plasma wave observations is the close similarity to the plasma-wave phenomena observed in the Earth's magnetosphere. Essentially, all major types of plasma waves detected in the Jovian magnetosphere have analogs in the Earth's magnetosphere. These include, for example, electrostatic waves near and upstream of the bow shock, electromagnetic continuum radiation, lightning- generated whistlers, whistlermode chorus and hiss, electrostatic electron cyclotron and upper hybrid emissions, and broadband electrostatic noise.

Any waves that are influenced by the presence of a plasma are called plasma waves. Because wave-particle interactions in a collisionless plasma produce scattering and thermalization effects somewhat similar to collisions in an ordinary gas, plasma waves are now recognized as being of fundamental importance for understanding the equilibrium state of planetary magnetospheres. In the Earth's magnetosphere, wave-particle interactions are known to be responsible for heating the solar wind at the bow shock, for the diffusion that allows plasma to enter the magnetosphere, and for the pitch-angle scattering that causes the loss of energetic particles trapped in the magnetic field. A large number of different types of waves can occur in planetary magnetospheres. The properties of some of the more important plasma wave modes are summarized in Table 8.1. In general, plasma waves can be classified as either electromagnetic, which have both electric and magnetic fields, or electrostatic, which have no magnetic field.