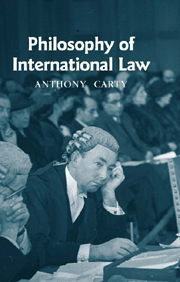 I wish to present a perspective from American culture and history, which may help to explain dominant American tendencies to resort to the unilateral use of force to resolve what Americans take to be demands of their national security. This is very far from wishing to deny the importance of international law, either as an intellectual construct or as an ideological weapon. Indeed, the wider cultural, historical analysis is intended to demonstrate the contrary. International law language is the final battleground in the struggle for legitimacy, which always accompanies the use of force. Nonetheless, international law is plagued by the problem of auto-determination of its normative system, by the absence of a framework of compulsory adjudication of disputes. This fact ought to lead international law theorists to attach exemplary importance to the character of international legal personality. If, indeed, it is a feature of the legal personality of states that they have sovereignty, why is it that international lawyers treat this fact as purely formal? Does state independence from authoritative external criticism not have itself a substantive aspect, a cultural, symbolic dimension that the history of the discipline can more fully elucidate?

As has been seen, modern international law theory does not directly broach the issue of international legal personality, except formally to delimit their legal powers through an international legal order. This is surprising because it is obvious that where the interpretation of norms depends entirely upon the independent exercise of judgment by the subjects of a legal order, attention should be paid to the character of these subjects.