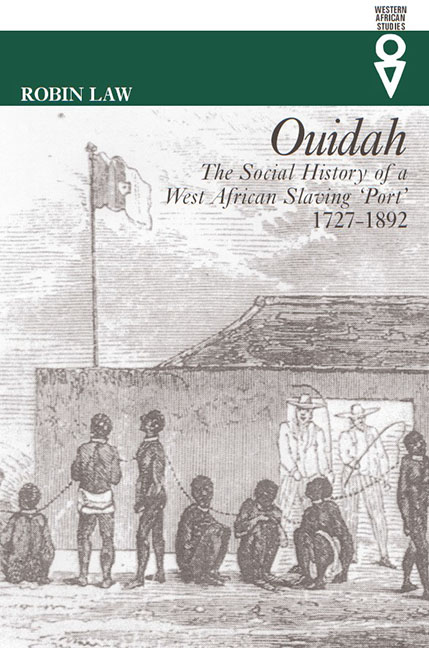 1 - Origins: Ouidah before the Dahomian conquest

The history of Ouidah is intelligible only by reference to its geographical situation, which has however often been misunderstood and misrepresented in accounts of the operation of European trade in West Africa. It is commonly referred to as a ‘port’, but this is strictly inaccurate, indeed positively misleading. Although it became an important centre for European maritime trade from the seventeenth century onwards, it is not in fact situated on the coast, but some 4 km inland, actually to the north of the lagoon which in this area runs parallel to the coast, and so separates Ouidah from the seashore. The slaves and other commodities exported through Ouidah had therefore to be taken overland and across the lagoon to the beach, rather than being embarked directly into European ships. At the coast itself, moreover, there is no ‘port’ in the sense of a sheltered harbour, but only an open roadstead. Indeed, heavy surf along the beach, and on sandbars parallel to it, makes it impossible for large vessels to approach close to the shore. European ships trading at Ouidah had therefore to stand 2-3 km off, and to communicate with the shore through smaller vessels, for which purpose African canoes were normally employed. The town's relative isolation from the sea, combined with its proximity to the coastal lagoon, played a critical role in shaping its historical development, during as well as prior to its involvement in the trans-Atlantic trade.

Although ‘Ouidah’ is the spelling of the town's name current nowadays, it occurs in European sources between the seventeenth and nineteenth centuries in various other forms: in English most commonly ‘Whydah’, in Dutch ‘Fida’, in French ‘Juda’, and in Portuguese ‘Ajuda’. All these are attempts to render an indigenous name that would be more correctly written, by modern conventions, as ‘Hueda’ (or in a dialect variant ‘Peda’).