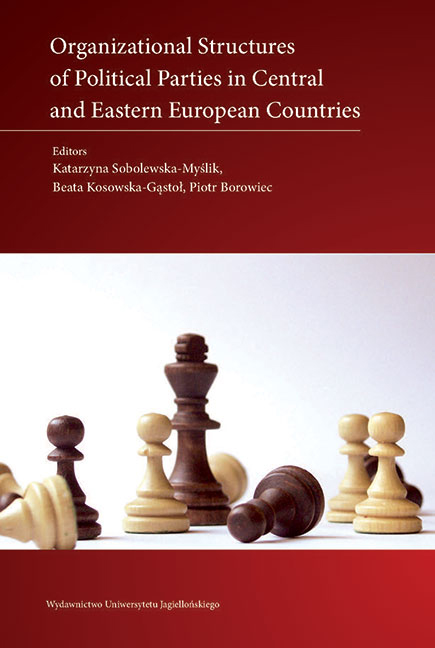 Several years ago, our team, established at both the Institute of Political Science and International Relations of the Jagiellonian University, and the Institute of Political Science of the Pedagogical University in Cracow, took on the task of analyzing the organizational structures of Polish political parties. In further pursuit of this interest, we then decided to widen the territorial range of the analysis to include political parties from Central and Eastern Europe. We believe that such research is especially important given that the organizational aspects of parties in CEE countries are currently very dynamic, due to both the young age of these parties, and the fast-changing political and social environments in which they have evolved. Our specific aim was to paint the widest possible picture of the organizational structures of the most relevant parties in Central and Eastern Europe, and to provide a basis for further comparison between them and their Western European counterparts. We focused specifically on the formal aspects of organizational structures of political parties in CEE, as reflected in their statutory rules.

In order to implement our project, we asked scholars from the region to prepare papers on the organizational structures of parliamentary parties in their respective countries, based on the formal statutes of those parties, as well as on the laws that govern their operation. The choice of countries included in the project was based on two inclusive criteria: geographic location, i.e. the countries of Central and Eastern Europe; and political history, i.e. post-communist countries, regardless whether or not they are democratic. These are: Albania; Belarus; Bosnia and Herzegovina; Bulgaria; Croatia; Czech Republic; Estonia; Hungary; Kosovo; Latvia; Lithuania; Moldova; Montenegro; Poland; Romania; Russia; Serbia; Slovakia; Slovenia; and Ukraine. The authors from these countries agreed to take part in the project, and the results of their work are presented in 20 chapters of this book. The introductory chapter contains a detailed outline of the project, and the final chapter summarizes the most important research findings. We thus submit to readers this 22-chapter book concerning the organizational structures of political parties in post-communist countries from Central and Eastern Europe.