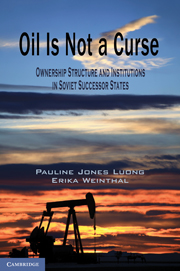 For the quality of our understanding of current problems depends largely on the broadness of our frame of reference.

The negative consequences of mineral abundance in developing countries – poor economic performance, unbalanced growth, impoverished populations, weak states, and authoritarian regimes – are widely accepted among highly respected academics, international nongovernmental organizations (INGOs), international financial institutions (IFIs), and even representatives of the popular media. This is particularly true of petroleum. Indeed, some have gone so far as to declare that the resource curse is “a reasonably solid fact” (Sachs and Warner 2001, 837), while others have proclaimed that there is a “Law of Petropolitics” whereby “[t]he price of oil and the pace of freedom always move in opposite directions in oil-rich states” (Friedman 2006, 31). Nigeria’s experience with petroleum provides a vivid illustration of this so-called “curse” of wealth. Although its government has accrued $350 billion in oil revenues since independence in 1960, between 1970 and 2000 its economy shrunk dramatically, its poverty rate “increased from close to 36 percent to just under 70 percent” (Sala-i-Martin and Subramanian 2003, 3) and its political regime “has become increasingly centralized and oppressive” (Jensen and Wantchekon 2004, 819).

But few seem to agree as to exactly why mineral wealth allegedly produces such negative outcomes. The most prominent explanations for economic stagnation focus on the direct effect that export windfalls have on the real exchange rate. In short, by shifting production inputs to the booming mineral sector and nontradable sector, they reduce the competitiveness of the nonbooming export sectors and hence precipitate their collapse (i.e., “Dutch Disease”) (see Auty 2001b). Others stress the indirect effects that export windfalls have on retarded economic growth through promoting corruption and indebtedness while discouraging productive long-term investment (see Gylfason 2001, Leite and Weidmann 1999). On the political side, the prevalence of authoritarian regimes in mineral-rich states, for example, is largely attributed to the effect that centralized access to export revenue, particularly during a boom, has on regime type by increasing the government’s fiscal independence and consequently decreasing both the ability and willingness of the general population to hold its leaders accountable (see Ross 2001a, Wantchekon 1999).