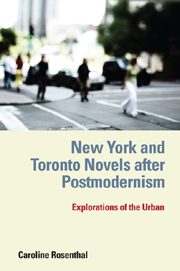 5 - Specular Images: Sub/Urban Spaces and “Echoes of Art” in Carol Shields's Unless

If we want to search the everyday for the non-signifiers which may be active within it we must catch them in the rough, in their unconscious or misunderstood situation, and not like water-creatures wrenched from the deep and left to die in the light of day.

Carol Shields'sfiction was for a long time labeled, and often belittled, as “domestic fiction,” a critical perception that changed only with the sweeping success of her novel The Stone Diaries (1993), which won both the Pulitzer Prize and the Governor General's Award, among other prizes. Critics have often underestimated Shields's fiction and overlooked the subtle intricacies in her texts, which, in an allegedly light fashion, deal with fundamental issues of life. Most of Shields's stories indeed pay close attention to the realities of quotidian life, but by describing the familiar from a slightly different angle they defamiliarize the known and point out the surreal and uncanny in the familiar. Shields's works never rendered the everyday and domestic sphere as simple, unambiguous, or insignificant but always represented it in its depth, complexity, and sometimes absurdity.

Shields's last novel, Unless, deals with the urban space of Toronto and is written from the perspective of a middle-aged, middle-class woman. The novel evokes the city in four distinct ways: first, it depicts distinctly urban lifestyles and discourses; second, it draws on real landmarks and sites in Toronto; third, it recalls textual representations and earlier images of Toronto, albeit without explicating them; and last, Unless deals with the city as a literary market place.