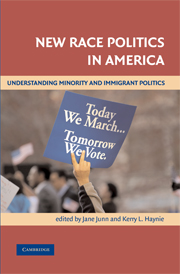 3 - Beyond Black and White: The Experiences and Effects of Economic Status among Racial and Ethnic Minorities

As the size of the black middle class has grown in the post–Civil Rights era, scholars have debated whether improved living standards and conditions of political equality have caused racial consciousness to be supplanted by class consciousness among African Americans. Wilson (1980) argued that the salience of race among African Americans would diminish with the decline of racial discrimination on the assumption that, as the life prospects of African Americans became more dependent on their economic status, their attitudes would be guided less by racial considerations and more by social class concerns.

Dawson (1994), however, found that identification with racial group interests was not weaker among higher status African Americans. On the contrary, income and education were positively correlated with the feeling among African Americans that they shared a common fate with other blacks. According to Dawson and other scholars (Cose 1995; Hochschild 1993, 1995), racial consciousness persists because racial discrimination remains sufficiently pervasive that individuals believe their personal advancement is tied to improvements in the status of the entire group. Middle-class African Americans continue to focus on economic disparities between blacks and whites and to equate their self-interest with the interests of the group despite their personal achievements.

The socioeconomic barriers created by racial prejudice and discrimination have led scholars to question whether the most recent immigrants to the United States from Latin America and Asia will follow the classic pattern of assimilation exhibited by earlier generations of European immigrants in which ethnic identities faded as individuals were structurally assimilated in American society (e.g., Alba and Nee 1997; Portes and Rumbaut 1996; Rumbaut 1997).