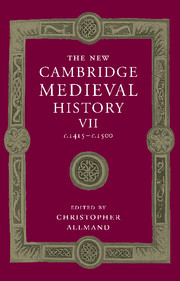 (b) - Yorkist and Early Tudor England

edward IV dated the start of his reign from 4 March 1461, the day he was acclaimed by the Londoners and took his seat on the throne in Westminster Hall. But his claim to be king of England received its real confirmation three weeks later, on 29 March, when he led the Yorkists to victory at Towton. This was the largest battle of the Wars of the Roses, and the decisiveness of its outcome forced the acknowledgement of Edward’s title by all but the most committed Lancastrians. There were, however, aspects of the situation which were less comfortable for the new king. The deposition of Henry VI was the first to draw its validity from a trial of military strength. Both previous depositions – of Edward II and Richard II – had rested on a much broader political consensus. A military verdict was necessary in 1461 precisely because there was no general agreement that Henry should go. Edward IV was also the first king to have his predecessor still at large when he assumed the title. Henry VI and his wife had remained at York while Towton was fought and had fled to Scotland on hearing the news of their army’s defeat.

Edward IV thus faced, in a particularly acute form, the need to establish himself as the rightful and effective ruler of England. The early years of his reign saw almost continuous military involvement in the north of England, where the Lancastrians could call on Scottish support, and more sporadic activity in Wales and elsewhere. It was not until the Yorkist victory of Hexham in 1464, followed by the surrender of the Northumbrian castles still held by the Lancastrians, that Edward’s military hold on his realm could be considered entirely secure – a hold recognised by a truce agreed with Scotland in June.