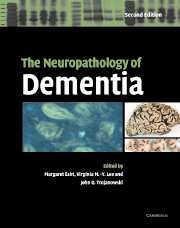 Alzheimer's disease (AD) is the sole cause of about half of cases of dementia in later life and a significant contributor to cognitive decline in a further quarter (Mirra & Hyman, 2002). It is therefore overwhelmingly the most important factor in what has been called the silent epidemic of dementia that is occurring in societies with ageing populations. Since this includes virtually the entire currently developed world, and because the incidence of AD can be confidently expected to rise in all societies where economic progress leads to increased life expectancy, AD ranks with tuberculosis and malaria in economic and social importance. In part for this reason, an enormous amount of research work has been performed in the last two decades and significant progress has been made in our understanding of the pathophysiology of Alzheimer's disease. It is true that no cure is yet in sight, but progress has been substantial and there are several avenues of research that might generate significant therapeutic advances within the next few years.

No account of the disease would be complete without some mention of the man himself. Amaducci (Amaducci et al., 1986) in an interesting article has described some aspects of the early history of the definition of the disease. Alois Alzheimer in 1907, when he was working in the Laboratory of Anatomy at the Psychiatric and Neurologic Clinic in Munich, described the clinical and pathologic features of the disease, which came to be named for him in a demented patient who had become symptomatic in her early 50s (Alzheimer, 1907). It was Alzheimer, along with his coworkers, Bonfiglio and Perusini, who first described neurofibrillary tangles.