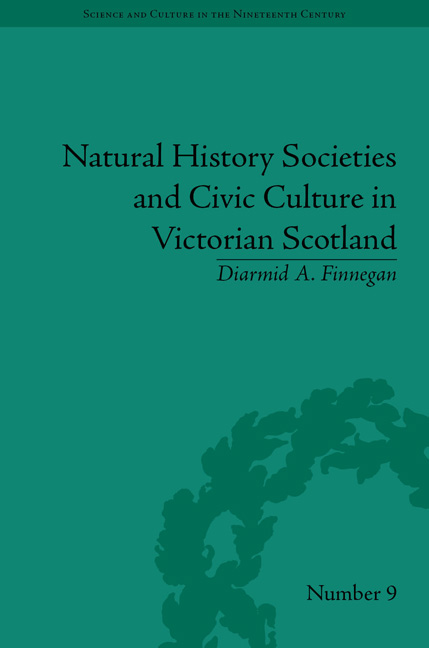 By far the greater number of societies have had their birth within recent years … this result is no outcome of any temporary burst of enthusiasm, of any exciting scientific ‘revival’ agitation, but is simply the natural fruit of the slow but sure development of the scientific spirit of our country.

Scientific societies, unlike short-lived evangelical awakenings, were for the Catholic controversialist and botanist James Britten a more permanent sign of a maturing scientific nation. For Britten the welcome maturing of science signalled by the establishment of local societies was explained by a longer national history of the effective diffusion of a scientific mentality. Such sentiments were shared by commentators otherwise separated by serious theological disagreement. Charles Kingsley, whose infamous spat with John Henry Newman put him firmly in an opposing religious camp, shared Britten's appraisal of scientific societies. In a lecture delivered to the Officers of the Royal Artillery in 1872 on the subject of ‘the study of natural history for soldiers’, Kingsley opined that a naturalists’ field club supplied ‘sound inductive habits of mind’ as well as promoting physical well being and manly moral virtues. Yet appeals to universal benefits, to a scientific zeitgeist or to national progress do not exhaust the reasons offered for the founding of a local scientific society. This chapter introduces Scottish natural history societies active between c. 1831–1900 by recovering three different but related perspectives discernable in contemporary accounts of their foundation and growth. The first perspective, epitomized by Britten and Kingsley, is that of commentators who offered a portrayal of Scottish natural history societies which pictured them as bodies contributing to national and universal scientific progress. The second, more local, perspective was propounded by founding members who promoted the social utility of associational fieldwork as a cultural and scientific pursuit. A third and related perspective, accenting responsibility for the welfare of the host town, presented natural history societies as part of a wider array of institutions committed to civic improvement through the education of local citizens.