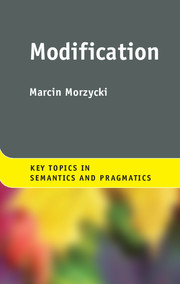 Modification
Buy print or eBook[Opens in a new window]

On a long car trip, one eventually encounters signs that say things like ‘now entering Massachusetts’. That seems reasonable enough. Sometimes, though, one encounters signs that say things like ‘scenic area’. This always struck me as faintly absurd. A government is perfectly entitled to draw lines on a map that define the precise boundaries between Massachusetts and adjacent states. But ‘scenic’? Has a transportation department employee been dispatched to discern the precise boundaries within which things have become – officially and legally – scenic? Why not also erect signs that say ‘ugly area’ or ‘disappointing region’ or ‘suburban sprawl’?

There are two linguistic issues that give rise to the sense of absurdity. One is important, but won't be our concern in this chapter: the subjective quality of adjectives like scenic that's incompatible with governments taking a position on them (see section 6.6). The other, however, is an aspect of a much larger question to which we will now turn. Even if we as a society decided to delegate our aesthetic judgments to regional transportation authorities, we would still find it odd for them to draw fixed borders between what's scenic and what isn't. Being scenic – like being ugly, disappointing, or suburban – is an inherently incremental notion.

Such vagueness is an essential design feature of language. From a certain perspective, it is a problematic one. Formal semantics is founded on truth and falsity, binary notions that might seem to leave no wiggle room for the incremental. Yet in using language, we handle vagueness effortlessly. Sometimes, we cope with it by simply eliminating it: Clyde, we might say, is not merely tall, but six feet tall or taller than Floyd. At other times, we instead modulate the vagueness and assert that he is, for example, a little too tall. We do this with concrete grammatical tools, morphemes we can identify and subject to analytical scrutiny.

Broadly construed, this will be the task of this chapter and the next. The initial challenge is how to reconcile the incrementality of vagueness with the discreteness of truth conditions.