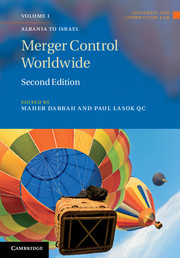 The European Union (EU) is a regional grouping of (at the time of writing) 27 European States. It is based on a number of international treaties of which the most important, for present purposes, is the Treaty on the Functioning of the European Union (TFEU). The EU is the successor of the European Community (EC); and the TFEU is the successor of the Treaty establishing the European Community (‘the EC Treaty’, which was itself the successor of the Treaty establishing the European Economic Community). No specific provision is made for the control of mergers in the TFEU, nor did any such provision feature in its predecessors. The main competition rules contained in the TFEU, Articles 101 and 102, are primarily directed at controlling the conduct of firms (or ‘undertakings’) rather than at changes to the structure of the market. Neither explicitly mentions mergers. Despite the creative interpretation of Articles 101 and 102 (and their predecessors), which extended their application to at least some merger activity, it was apparent from an early stage in the EU’s development that legislation would be needed in order to institute an effective system of merger control. The Commission of the European Communities, as it then was (‘the Commission’) first proposed a regulation on the subject in 1973. It was not until 1989, however, that agreement could finally be reached among the Member States. The result was the adoption of Council Regulation (EEC) No. 4064/89,which was subsequently amended in 1997, and was replaced in 2004 by a new Regulation No. 139/2004, further modifying and consolidating the EU system of merger control.

In a memorandum issued in 1966, the Commission adopted the position that what is now Article 101 TFEU did not apply at all to agreements ‘whose purpose is the acquisition of total or partial ownership of enterprises or the reorganization of the ownership of enterprises’. That Article prohibits agreements between undertakings which have as their object or effect to prevent, restrict or distort competition. The Commission considered that it would only apply to an agreement between undertakings which remained independent of one another, which would not be the case if the agreement resulted in a full merger.