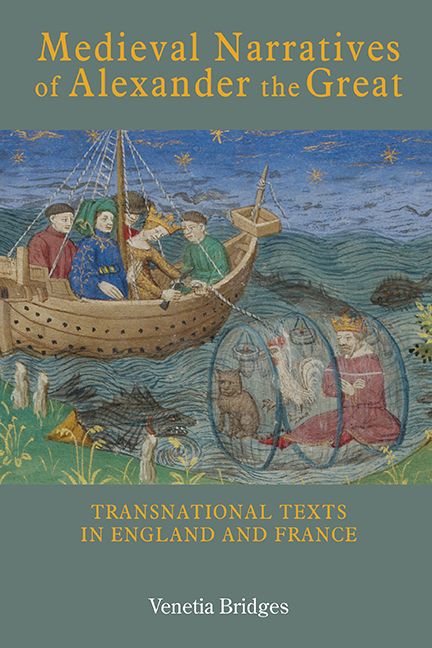 What could medieval authors have read or heard about Alexander the Great? This is a vital question, since understanding the nature of the literary and cultural material to which writers in the Middle Ages had access helps us to identify their intellectual inheritance (both texts and also interpretative traditions) and thus to analyze their translatio studii more perceptively. To address this large question, I shall discuss the main narratives focusing on Alexander in the period between his life in the fourth century bc and the twelfth century ad, the point at which my analysis of medieval texts begins. I shall focus on the ways in which antique and early medieval authors engage with the narrative of Alexander's life and conquests, highlighting their preoccupations and approaches in order to characterize their performance of translatio. This allows me to identify similarities between texts that do not relate to one another directly but that may still share themes and interpretations.

The Alexander materials inherited by twelfth-century and later medieval authors were a complex mixture derived from a wide variety of direct and indirect sources. This complexity and variety may be one reason for the freedom with which high medieval authors treated Alexander, since there was no single prestigious account of the Macedonian king looming in the background to restrict their poetic imagination. Yet there was also an awareness of Alexander as a historical figure with a long and convoluted literary history, as demonstrated by Chaucer's Monk in the late fourteenth century. This history is important for later medieval Alexander works even if only in the sense of ‘known unknowns’, that is, material and/or authors that medieval poets knew about but to which they had no access. So this chapter will not only discuss works that were definitely used (directly or indirectly) by such poets, but also some important texts and authors who were mere names in the high Middle Ages. It will also analyze works and writers, such as Arrian, that were unknown in the medieval period but whose approach contextualizes other antique works.