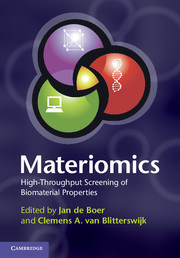 Chapter 11 - Beyond bed and bench

Materiomics is growing. In this book, we have discussed and reviewed how one side of the materiomics coin, the screening of libraries of biomaterials, is developing, but the future of screening will go hand in hand with the other side of the coin – modelling. Materiomics is growing and is, one could say, still in its infancy. Currently, most materiomics research is performed by academic research groups, although a small but increasing number of companies are active in this area. It will be helpful to understand how fast this field will grow, and how it might develop.

To sketch a potential scenario perhaps it is worth looking at recent developments in the field of molecular biology. In the mid-1990s, there were specialized machines in the lab to produce oligonucleotides, so-called primers, used in the polymerase chain reaction, a specialist job which gave the lab a scientific head start. These days, however, a primer can be ordered online and be at your bench in days, for the cost of a few dozen Euros. By the late 1990s, we saw cDNAs arrayed on nitrocellulose, which allowed simultaneous quantification of expression for dozens to hundreds of genes. No more tedious northern blotting one gene at a time! Driven by these early successes, many institutes started investing in arraying equipment and software development, as DNA microarray analysis became increasingly popular. But the real breakthrough in the use of this technology came when companies such as Affymetrix invested not only in standardization and professionalization of the technology, but importantly also in the work flow of a DNA microarray experiment. These companies provided a full package with not only arrays but also the incubators, washing, data analysis, detailed work protocols, image analysis software and a customer service platform. In both cases, the new technological possibilities of oligonucleotide synthesis and DNA microarray production paved the way for breakthroughs in science. We think that this will also be possible for materiomics.