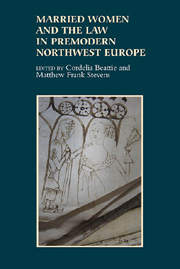 Married women in early modern Germany were affected by the law in a wide variety of ways - so many, in fact, that a single essay cannot hope to cover them all. The special character of women's legal position in each German polity forces us, in fact, to pause and ask ourselves what we mean by concepts we have largely taken for granted - ‘the law’ itself and how it assigned different rights to people according to sex and marital status. In pre-Napoleonic Germany, this question is of immediately striking relevance. For one thing, the Holy Roman Empire of the German Nation contained a large number of sovereign territorial units - almost 2,500 when one includes the sovereign estate of Imperial Knights, and 384 even when these are excluded. Moreover, these territories were widely heterogeneous on almost every conceivable axis of comparison including their legal systems. Furthermore, in German-speaking central Europe both the law itself and its concrete implementation in daily life were affected by the co-existence of various levels of authority in each society - empire, prince, community, guild, church - so the nature of the ‘composite state’ of the Empire raises questions about the legal system, which are not easy to fit into the framework which historians have devised for other early modern European societies with a closer resemblance to modern nation-states. Germany is thus a good context for reflection on what we might mean by the effect of the law on the lives of married women, because it undermines so many of the ideas we have come to take for granted about what the law is, where it comes from, and how it functions.