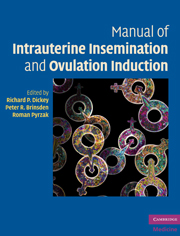 1 - An overview of intrauterine insemination and ovulation induction

Sperm preparation methods developed for in-vitro fertilization and embryo transfer (IVF-ET), such as the wash, swim-up and swim-down techniques, and the use of density gradients, have led to a resurgence of interest in intrauterine insemination (IUI). The use of washed prepared sperm for IUI has also resulted in a significant reduction in the side effects associated with the use of neat semen for IUI (which never should be used), such as painful uterine cramps, collapse and infection. In view of the fact that IUI is a relatively simple procedure compared with in-vitro fertilization (IVF), its popularity as a treatment option for certain diagnostic groups of infertile couples is increasing, since it is intermediate between the simpler ovulation induction (OI) and the more “high tech” IVF. This is particularly so in developing countries, where facilities for IVF may be limited and the cost of treatment by IVF is a major issue.

The term “artificial insemination” (AI) covers a range of techniques for insemination: it may be intra-vaginal, intracervical, intrafallopian, intraperitoneal or intrauterine. AI has been used for many years for a number of different indications, and either the husband/partner's sperm (AIH) or donor sperm (AID) may be used. It is almost 200 years since John Hunter advised a man with hypospadias to inject his seminal fluid into his wife's vagina with a syringe, resulting in a normal pregnancy. In the nineteenth century, Sims artificially inseminated six women who had negative postcoital tests. He used their husbands' semen obtained from the vagina after intercourse; one pregnancy was achieved. The first reported case of human donor insemination was by William Pankhurst from Philadelphia in the United States in 1884.