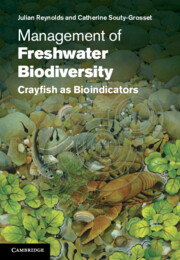 Introduction: Biodiversity in freshwater systems, and the key roles played by crayfish

More than 20 years ago, the term ‘biodiversity’ was coined, deriving its name from the concept of ‘biological diversity’, at a time when the ecological importance of the various components in communities was becoming generally evident (Wilson, 1988). Several authors, such as Gaston & Spicer (1998), have since emphasized the multiplicity and range of meanings associated with the term. Biodiversity, the variety of life and its processes, includes not just the panoply of living organisms (species diversity) and the genetic differences between them, but the communities and ecosystems, including landscapes (habitat diversity), in which they occur, and the ecological and evolutionary processes through which they function, change and adapt. The pool of living diversity is dynamic, with changes in genetic variation, structure and function. However, the biodiversity of an area cannot be simply represented as the number of taxa present; thus, introducing a species to a community does not necessarily increase its biodiversity, and may in fact deplete it. Nonetheless, as we shall see, focusing on individual species is a valuable means of monitoring and protecting biodiversity.

Fresh waters are an essential component of landscapes in most of the world, and are often critically linked to the welfare of terrestrial and marine ecosystems. Freshwater availability or flow is the dominant variable in freshwater ecosystem functioning, so it is vitally important to maintain and secure water supply to streams and wetlands. Indicators of functioning, or their measurable surrogates, have been suggested for some freshwater ecosystems: these include litter breakdown rates, benthic metabolism, and functional feeding groups. Among the most important members of any community are ‘keystone species’, defined as those that control communities by reason of their size, abundance, feeding patterns or dominance in interactions, and which thereby affect ecosystem functioning. Numerous fish and crayfish species are excellent examples of keystone species in freshwater communities, and the latter are the main focus of this book.