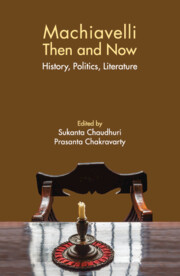 Lamenting the failure of modern political scientists in grasping the real meaning of tyranny, Leo Strauss asserts, ‘One cannot overcome this limitation without reflecting on the basis, or the origin, of present-day political science. Present-day political science often traces its origin to Machiavelli.’ A decade later, he adds, ‘[C]ontemporary tyranny has its roots in Machiavelli's thought, in the Machiavellian principle that the good end justifies every means… In the Discourses Machiavelli sometimes acts explicitly as an adviser of tyrants; in The Prince he acts in this capacity only silently.’ Strauss traces the horror of the Third Reich back to the writings of a sixteenth-century Florentine bureaucrat. In this he is not alone amongst twentieth-century theorists. Ernst Cassirer, for instance, locates in Machiavelli's writings the instrument that severed the connections between the state and the ‘organic whole of human existence’, which in turn precipitated the crises of twentieth-century Europe. Strauss goes beyond the measured critique of Cassirer and calls Machiavelli ‘a teacher of evil’, adding that modern scholars choose to ignore this evil ‘because they are the heirs of the Machiavellian tradition; because they, or the forgotten teachers of their teachers, have been corrupted by Machiavelli’.

Strauss's account, if a little too melodramatic in tone, is however representative of a five-century-long tradition of reading and making meaning of Machiavelli's writings, particularly prevalent in English and French traditions of political thought. In fact, Strauss's words, laden with satanic implications, are an uncanny echo of the first known English critique of Machiavellian thought, formulated by Reginald Pole in Apologia ad Carolum Quintum (1539). There Henry VIII, Pole's erstwhile patron and mentor, is denounced not only as a tyrant but as the Antichrist, who derives his tyranny from Machiavelli's occult teachings, which Pole goes on to describe as the writings of the ‘enemy of mankind, giving all the advice of the enemy’. As soon as Pole chanced upon the book, he knew it was written by the finger of Satan (‘Satanae digito scriptum’).The most famous denunciation of Machiavelli as the tutor of tyrants comes later in the sixteenth century, in the Discours contre Machiavel (1576) of the Huguenot writer Innocent Gentillet.