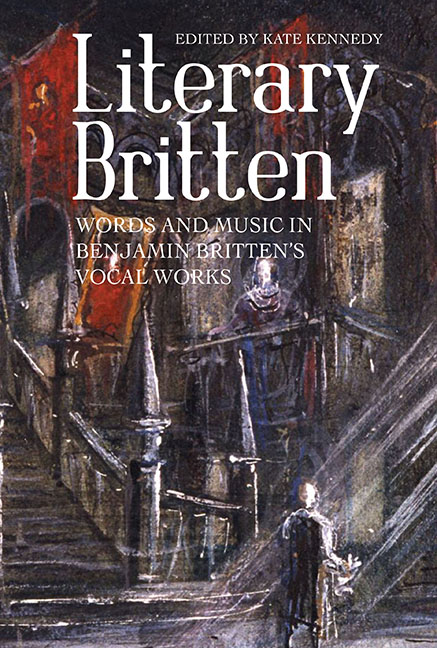 Justin Vickers
Affiliation:
State University in October 2013, where he is Associate Professor of Music.

Benjamin Britten's War Requiem (1962) is widely viewed as one of the twentieth century's commemorative masterpieces, a work that emerged from the long shadow of World War II. Yet Britten's immediate and heartrending response to the horrors of the conflict, only weeks after the cessation of fighting in Europe, is his song cycle The Holy Sonnets of John Donne, op. 35 (1945). Famously, Britten completed the cycle between 2–19 August of that year at Snape. Little known, however, is that on 15 August 1945 – thirteen days after the first song, ‘Oh my blacke Soule!’, was dated, and four days before the extant final song of the cycle, ‘Death, be not proud’ was autographed – a heretofore unheard ‘Epilogue’, a completed and fully notated song of some forty bars, received three final strikes: a pencil line starting in the upper leftmost corner and cutting downward across the autograph manuscript of each of its three pages. A setting of text from Donne's Meditation XVII that contains the iconic lines ‘Never send to know for whom the bell tolls’, the song was never included in Britten's final score, its plaintive utterance never heard on the concert stage. Neither sent to the publisher nor given a single performance, the pencil draft manuscript sits virtually unseen in the archival vault of the Britten–Pears Foundation in Aldeburgh, Suffolk, protected from decay yet essentially silent to the world.

In the wake of the 2013 Britten Centenary year celebrations, uncovering a piece of Britten's music that has never been heard or discussed in the secondary literature is, I might suggest, an infrequent occurrence that we will ever decreasingly experience. Despite its catalogue entry in the Britten– Pears Library, the ‘Epilogue’ has never been discussed in Britten scholarship. The song's existence is merely documented in Stephen Banfield's Sensibility and English Song, Stewart R. Craggs's Benjamin Britten: A Bio-Bibliography, Peter J. Hodgson's Benjamin Britten: A Guide to Research, in the classified list of works in Michael Kennedy's Britten and in the chronology of John Evans, Philip Reed and Paul Wilson's A Britten Source Book. Yet in the first three volumes of Letters from a Life: Selected Letters of Benjamin Britten, where the editors Donald Mitchell, Philip Reed and Mervyn Cooke highlight The Holy Sonnets of John Donne and letters from that period, there is no reference to the ‘Epilogue’ whatsoever.