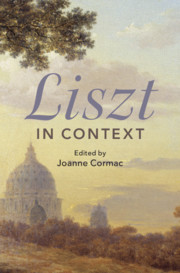 from Part IV - Reception and Legacy

Liszt possessed, in addition to his fame and longevity, a singular attraction for artists. Especially in his youth, his Byronic good looks, characterised by an ivory profile, was such that his face was ‘one of the “looks” of the nineteenth century’.1 Much of this imagery can be placed within a very well-researched and documented biography to which the visual can constantly be referred. Nonetheless, the complexity and diversity of this vast array of representations is greater than one might at first expect as resulting simply from its scale. Richard Leppert aptly described this diversity when he observed that:

The images [of Liszt] employed all major visual media of the nineteenth century: photography, oil painting, oil miniature, pastel, drawing … watercolour, silhouette, wood engraving, steel plate engraving, lithography, sculpture, relief … and caricature. In an age obsessed with the visual, Liszt’s body was an object of almost fetishized fascination, whether in a form that idealised him as an artistic genius or mocked him as a freak of nature or tasteless circus performer.2

It is also worth pausing for a moment to consider implications of this richness of the source materials from the perspective of how we are to approach it now. While scholars can find frustration in dealing with, say, the paucity of portraits and relevant information for Haydn, we have sheer abundance with Liszt. We may not be hampered by uncertainty over provenance or identity of the artist, but the very mass and variety of Lisztian iconography presents its own not insignificant challenges. The risk most apparent to scholars seeking confirmation of presumed biographical or historical narratives is that isolated images can be cherry-picked to match assumptions: Liszt as showman, as revolutionary, as romantic hero and so on. All of these, and more, can be readily confirmed by his iconography and yet this approach offers little insight beyond his well-known biography and reception. It is, in other words, easy to slip into the mode of interpretation that views Liszt’s images as uniquely distinctive to him. Lithographs or photographs are not compared to the countless others from the same times or places or even to those of other artists. Interpretations of one-off oil portraits of Liszt, for example, easily tempt us into self-referential stances, especially so if not compared with others by the same artist.