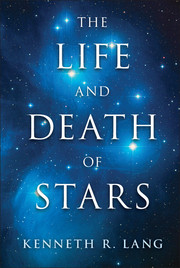 A Range of Destinies

No material object can exist forever, and stars are no exception. Although their lives may be measured in millions or billions of years, stars do age and die, and their existence is always transitory and impermanent. They all will cease to shine and return to the darkness from which they came.

Stars reach the end of their bright, shining lives when all of the available sources of subatomic energy have been exhausted. Their central thermonuclear reactions, which keep the star hot inside, are then turned off. It is akin to a hot fire that has burned away, and all that is left are warm embers that slowly cool and fade into ash.

There is no heat and outward pressure being generated inside such a star, so the internal support has been removed and it begins its ultimate contraction. Some stars finish their life quietly, cooling into dark remnants of their former splendor. Others explode and briefly shine with the light of 1 billion stars.

Nothing is completely destroyed, and a dying star always is being transformed into something else. The demise of a dying star results in the simultaneous creation of a new star from its collapsing core, with a final resting state that depends on the star’s mass.

As in the beginning of their life, the central regions of all dying stars are subject to the unsupported, inward pull of gravity from all sides. There is no escape from it in any direction, and the entire stellar mass is compressed into an increasingly smaller radius. It only stops when some outward pressure grows sufficiently large to halt the contraction, which means that there is an enormous range in stellar size and mass density (Table 11.1). The mean mass density of the Sun, for example, is comparable to that of water, whereas the density of a neutron star is similar to that of the nucleus of an atom.