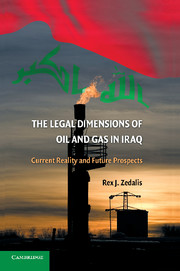 10 - Changing the Mix: Transition Fails and the Face of Iraq Is Altered

It has never been the objective of this study to focus upon, illuminate, and untangle the political aspects of the controversies surrounding the various components of Iraqi oil and gas law. Instead, the effort has been concentrated on providing insight about the purely legal dimension of the measures, both domestic and international, that make up that body of law. To be sure, the political scientist or expert in international relations might look askance at such an effort, lamenting that a narrow and technical focus of that sort not only ignores the realities that drive the development of law itself, but proves mundane, obtuse, and soporific when compared to an exploration of the social, religious, ethnic, and economic domestic forces within Iraq that shape debate and positions regarding oil and gas law, or the great-power posturing and need for energy that motivates actors on the international stage to advance the positions they do.

Such presumed criticisms are not without merit. There can be no doubt that a complete understanding of any legal issue requires a modicum of sensitivity to the political context in which it is set. Nonetheless, to the extent that such criticisms are advanced by those insistent either that law counts for less than one might think or, worse, that it obscures and frustrates the only valid, authentic, and genuine compulsions that should be freely permitted to shape the structure of societies both nationally and internationally, it bears reiterating that people around the globe constantly profess admiration for the rule of law, and those charged with administering the law must be fully attentive to all the hypertechnical and nuanced aspects of the various legal principles with which they are entrusted.