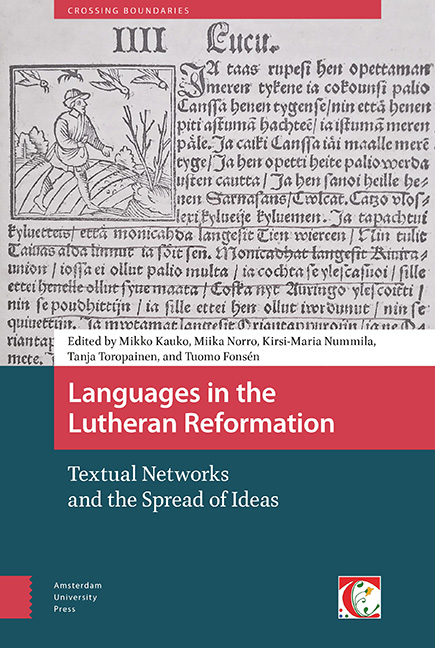 10 - Polyglossia and Nativization: The Translation of Zoonyms in Early Dutch Bibles

The topic of this study is the influence of Luther's texts as source texts on 16th-century Dutch Bible translations. The initial situation was an interesting starting point, as during that time both Protestant and Catholic translations were produced in the vernacular. The study examines how different translation ideologies and strategies were applied in the texts, with a focus on translations of the names of exotic animals in the Old Testament. The Catholic translation principle dating from mediaeval times can be described as relying on source texts, whereas the Protestant principle was more concerned with adapting the text to the target language. The study shows, for example, that the Protestant translations do, in fact, generally use more target language vocabulary, while in the Catholic vernacular translations, the tendency is to rely on loan words.

This essay focuses on Dutch vernacular Bibles of the early 1500s. The translation and production of these is marked by the survival of a mediaeval tradition, by the production of New Testaments and complete Bibles in short succession in Antwerp, and by a doctrinal eclecticism where an ostensibly sound Catholic Bible translation would avail itself of Luther's works. The Dutch-speaking Low Countries today encompass the Netherlands, the Dutch-speaking northwestern half of Belgium, and a sliver of northern France. Political divisions between these parts would not emerge until the 17th century.

I am interested in comparing two ideologies of translation: a ‘Catholic’ one, where the end result of the translation is functional, a means to an end; and a ‘Protestant’ one, where the end result of the translation replaces the received source text and becomes the main mediator of religious truth and redemption. I examine whether these ideologies, and the competing sources of the Latin Vulgate and Luther's vernacular translations, have differing effects on the translation of exotic zoonyms in the Old Testament. I am aware that this dichotomy simplifies matters and does not distinguish, on the Catholic side, between loyalty to the Vulgate and humanist striving towards a better source text. But as a way to approach the various Bible translations of the 1520s and the principles underlying these, I nonetheless believe it adequate.