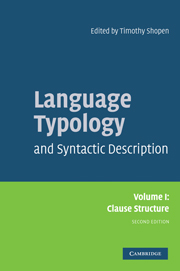 There are at least four senses in which one can talk about clause or sentence types in a language. One way is in terms of the distinction between declarative, interrogative, and imperative sentences. This distinction, really one of sentence type, is discussed elsewhere in this volume by König and Siemund in chapter 5. A second sense of clause type is represented by the distinction between main clause and subordinate clause, and among different types of subordinate clauses. Issues related to this sense are discussed in the chapters on subordination, such as vol. II, chapter 2 by Noonan, and vol. II, chapter 4 by Andrews. A third sense of clause type concerns the way the same event or situation can be spoken about, from different perspectives, with grammatical consequences such as voice and pragmatic consequences such as topic and focus. This kind of variation is discussed in chapter 7 by Foley. The fourth sense, the one discussed in this chapter, involves different types of clauses in terms of their internal structure, primarily surrounding different types of predicates. Here, the most basic distinction is between verbal and nonverbal predicates. In much of this chapter, differences in clause type hinge on the part of speech of words serving in predicates, to which chapter 1 by Schachter and Shopen is relevant. Among clauses with verbal predicates, we can make further distinctions based on the argument structure of the verb, including the distinction between transitive and intransitive clauses and finer distinctions. These are discussed in section 2 below. We first examine, in section 1, different types of clauses with nonverbal predicates.