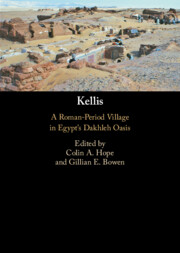 Accounts of the economy of ancient Egypt always begin with the Nile, for good reason. In the Dakhleh Oasis, the Nile was hundreds of kilometers distant. We begin, therefore, with its absence, or at least distance, as it is fundamental to understanding the economy of the oases as we see it in the Kellis finds. In one sense, the Nile was replaced by wells, from which came the water that made life and agricultural production possible. It is with these that Guy Wagner (1987, 279–83) began his classic account of the oasis economy, published when work at Kellis was in its infancy. Although there are some complexities in the technical vocabulary used, wells in general are called hydreuma in Greek, and most of their names begin with the Egyptian Pmoun, ‘the water of’. The names often begin, pleonastically, Hydreuma Pmoun, as in O.Kellis Gr. 270 and numerous ostraka from Trimithis (O.Trim. I). The economy of Kellis, like that of other sites in the oases, certainly depended on a large array of these wells in its immediate and wider surroundings. The rarity of the word hydreuma in the Kellis documents (absent from P.Kellis I, once in P.Kellis IV, three times in O.Kellis Gr.) is probably just a quirk of the documentation, as Pmoun names are frequent. Rich though the Kellis documentation is, it is neither evenly informative nor self-explanatory, a lesson important for many other aspects of the economy.

Because of its location and environment, the Great Oasis occupied in the Roman period a distinctive and somewhat paradoxical position in the ancient economy. It was, as we shall see, far from being a subsistence economy. Instead, it was to a remarkable degree an export-driven society, the scale and wealth of which in the Roman period could not have been present in a true subsistence economy. At the same time, its distance from other sources of food meant that it had to rely on itself for sustenance to an exceptional degree. The necessary foundation of the economy, therefore, was feeding the people (Chapter 6.2). That began with wheat. Wagner (1987, 286) noticed that the oasis documents available to him provided much more evidence for barley than for wheat, but he was unable to explain this.