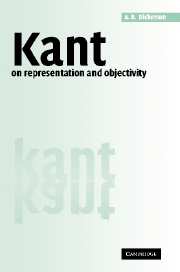 3 - The unity of consciousness

A. B. Dickerson
Show author details

A. B. Dickerson
Affiliation:
University of Canberra

The previous chapter presented an overview of my interpretation of Kant's central argument in the B-Deduction. I have suggested that this argument is Kant's attempt to demonstrate the truth of his ‘two-faculty’ model of cognition – the claim that, in addition to receptivity, a category-governed spontaneity is essential to our cognition. My discussion in the previous chapter focused on Kant's reasoning for (β), the claim that if our cognition involves a spontaneous synthesis, then this synthesis must be governed by the categories. In this chapter I turn to examine Kant's reasoning for (α), the claim that all our cognition must involve a spontaneous synthesis. I argue that it is in § 16 of the B-Deduction that one finds what I shall call Kant's ‘master argument’ for this claim.

Kant's discussion in § 16 has been variously interpreted as concerned with the ontological unity of the mind, criteria of personal identity, or conditions for the ‘ownership’ of mental states. I shall argue in this chapter that all of these views are incorrect, and that Kant is in fact concerned with a problem that is the representationalist equivalent of the problem debated in the nineteenth and twentieth centuries as the problem of the ‘unity of judgment’ or the ‘unity of the proposition’. Kant argues that if we are to make sense of the unity possessed by complex representations then we cannot think of representing objects as a purely passive, or receptive, affair, but as one that must also involve some element of spontaneity.