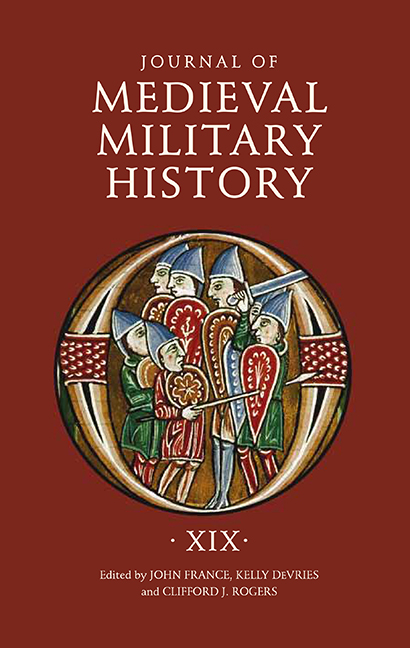 Only a few fourteenth-century recipes for gunpowder proper (for use in shooting projectiles from guns) are known. They can be difficult to interpret, partly because their rarity hinders comparisons between texts in order to clarify ambiguous directions. This article presents and discusses the earliest known recipe, from Friuli and dated 1336, in comparison to what was previously the earliest widely-known formulation: the Augsburg recipe of 1338–c. 1350. The German text (translated into English here for the first time) provides context for the Italian recipe, and the latter, in turn, in combination with laboratory testing, settles a disputed reading of the German formula.

In two articles in the previous volume of this journal, Clifford J. Rogers and Trevor Russell Smith offered new transcriptions and translations of several nearly unknown gunpowder recipes from the last hundred years of the Middle Ages. Rogers noted that there were very few complete recipes for gunpowder proper (that is, for mixtures specifically intended to propel projectiles from guns) that could be reliably dated to the first fifty years of the history of cannon in Europe (1326–1375). In fact, since the recipes in the Munich copy of the Büchsenmeisterbuch (MS. Cgm 600) probably date to around 1400 (rather than c. 1350, as once thought), and since the French “recipes” of c. 1338, 1345, and 1350 are actually purchase records rather than instructions for manufacture, and moreover do not specify the proportion of charcoal to be used,3 that left only one such recipe known to scholars of early artillery: one from Augsburg, composed not long after 1337. That one recipe, moreover, is sufficiently ambiguous that different scholars have read it in two different ways, leaving the earliest history of cannon-powder very unclear. It is now possible to expand the roster from one to two, adding an even earlier formulation: one written down in northern Italy in 1336. Comparison to this earlier recipe, in combination with laboratory testing, makes clear which reading of the German recipe is correct. The combination of the two recipes, correctly interpreted, gives us a good picture of the earliest cannon-powders, which were by modern standards low in saltpeter and high in sulfur.