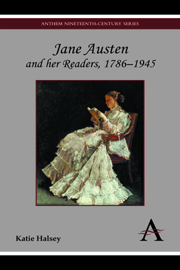 Stereotypes of the Reading Public

Moralists and other cultural commentators of the late eighteenth century were, as we have seen, particularly concerned about the reading habits of young female readers. Their worries and concerns were both intensified and developed in the nineteenth century. Born of the explosion of cheap print in the middle of the nineteenth century, and the increase in mass literacy over the course of the century, concerns about the abilities of the reading public more generally frequently surfaced in visual art, fiction, and, in particular, the periodical press, throughout the nineteenth century. During this period, therefore, whichever edition they happened to be reading, and however they responded to the material qualities of the book itself, Austen's readers were faced by particular cultural stereotypes about reading, which affected the ways in which many of them, particularly her female and labouring-class readers, responded to fiction generally, and also to her novels in particular. The material considered here is taken from a wide and deep survey of periodical publications, from highbrow literary reviews such as the Edinburgh Review, Blackwood's Edinburgh Magazine and the Quarterly Review, through general interest periodicals such as Tinsley's Magazine and The Quiver to more esoteric material, such as The What-Not, The Ladies' Treasury, The Cabinet of Fashion and Romance and The Englishwoman's Magazine and Christian Mother's Miscellany. The periodical publications considered have different ostensible aims, they are directed towards different consumer groups, they enjoy different political, moral and intellectual reputations and cultural resonances, and they deal with different subjects and are written in a range of different registers.