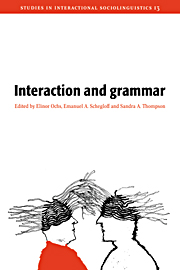 By
Bambi B. Schieffelin
Edited by
Elinor Ochs ,
Emanuel A. Schegloff  and
Sandra A. Thompson
Show author details

Since their earliest contact with Europeans, the Kaluli people who live at the foothills of Mt. Bosavi in the Southern Highlands Province of Papua New Guinea have viewed books as powerful and authoritative sources of information that white people use to shape and control the behavior of others. In a narrative told to Steve Feld and myself in 1990 about government contact in the early 1950s, an educated Kaluli man told us about his father who had been selected by white patrol officers as the first local counsellor. As he put it, “my father was given the black shirt with a red stripe, the belt, knife, stick and a book, that book, people thought that if you kill, the blood of a dead person will go inside in the book, and the white man will know straight away and come and shoot you with a gun; that fear, everywhere so, everyone got frightened when my father got this.”

This book, which was kept by the counsellor as part of his responsibilities and taken out only during infrequent government patrols made by white officers, listed the names of villagers. While Kaluli people did not share an understanding of why their names were written down by government people, they did not miss the fact that this book and its meanings were created and owned by white people, who used it as an instrument of control, authority, and information. These early census and record keeping activities, part of pacification efforts, were used to track and document Kaluli people in order to discourage their periodic relocation to new village sites, their solution to minimalizing the depletion of local resources.