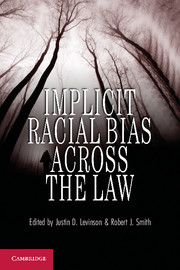 Scientists have demonstrated that implicit biases are pervasive, large in magnitude, and have real-world consequences. What can we do about them? One principal strategy is to decrease implicit biases in our minds (the other is to disrupt their causal link to behavior). To decrease bias, we should understand its source. Put crudely, is it nature or nurture? I argue that its source is mostly nurture, and of a specific sort – via vicarious experiences with outgroups mediated by electronic media. These vicarious interactions, fed to us via entertainment, news, social media, and computer-mediated communities, strengthen particular mental associations. If these vicarious experiences are indeed a substantial source of implicit bias, what might policymakers do in the shadow of the First Amendment?

WHERE DOES IMPLICIT BIAS COME FROM?

Perhaps implicit biases are “hardwired” into our DNA and into our brains as a product of evolution. In support of this position, one might cite research revealing that certain biases are shared by other primates. Consider, for example, the recent work by Neha Mahajan, Mahzarin Banaji, and colleagues, who studied intergroup biases of rhesus macaques, a primate species that diverged from our evolutionary line between twenty-five and thirty million years ago. Deploying an ingenious variation of the Implicit Association Test, the researchers discovered that these monkeys distinguished between photographs of ingroup and outgroup members automatically and stared longer at outgroup monkeys (M = 10.83 s vs. 6.58 s; p = .004). This behavior was consistent with the hypothesis that greater threats would prompt longer stares. Moreover, this longer span of attention could not be explained by unfamiliarity. Even “familiar” monkeys (monkeys that at adolescence had recently exited the ingroup to join an outgroup) prompted longer stares. In addition, the male monkeys (although not females) showed an implicit attitudinal preference in favor of the ingroup: they associated ingroup members more with favorable items (i.e., fruits) and outgroup members more with less favorable items (i.e., spiders; F(5,185) = 3.06, p = .011).