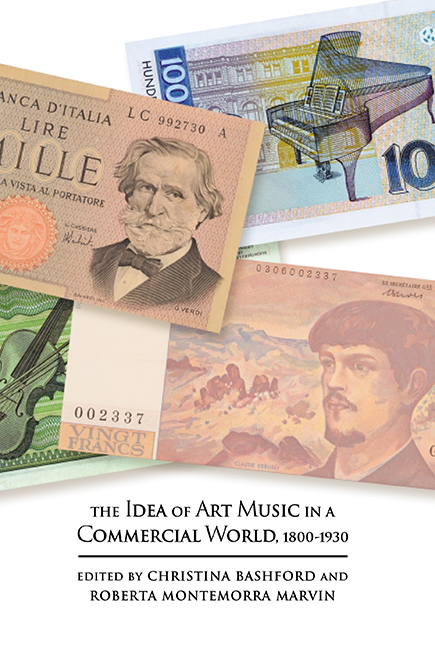 Introduction: The Idea of Art Music in a Commercial World

IN 1900, a Chicago-based writer for the Music Trade Review reported that Ignacy Jan Paderewski, the Polish pianist whose virtuosity and charismatic platform personality on the touring circuit was making him something of a household name from Vienna to New York, had purchased a ‘handsome’ piano from a Connecticut manufacturer. It was to be a gift for the Paderewski Singing Society in Chicago. The writer revelled in the marketplace advantage for any firm that could boast a linkage with such a famous figure, commenting:

To have the name of the great pianist, whose earnings in America this season exceeded something over $200,000, associated with any piano is a distinct point gained in favor of that instrument, and the Huntington manufacturers have every reason for feeling elated over the high compliment paid them by the eminent pianist.

Clearly, Paderewski's alleged earnings were understood as astronomically high (and to gain perspective here, we might note that average annual wages at the time in the United States amounted to a mere $438). They were also a telling articulation of the pianist's artistic celebrity, which – as the writer suggests – was poised to be leveraged by others in the marketplace. In this respect, Paderewski was an integral part of music's modernizing commercial world.

That commercial world – including the relationship of art, money and performers – has become a fairly well-rehearsed topic in musicological literature, and it forms the background for the essays in this book. Yet, as the reader will discover, the essays approach the discussion from new directions to investigate (among other things) how the ideas that became attached to art music in the nineteenth century, and even the very idea of art music per se, were intertwined with the technological advances and socio-economic shifts that were then in train.

To bring those changes into focus, we might consider that, even by 1900, Paderewski (born 1860) would have witnessed some remarkable developments in the music business during the course of his career. Those developments had begun in the early nineteenth century and were catalysed by industrialization and the swathe of advances in science, manufacturing and transportation that followed on from it.