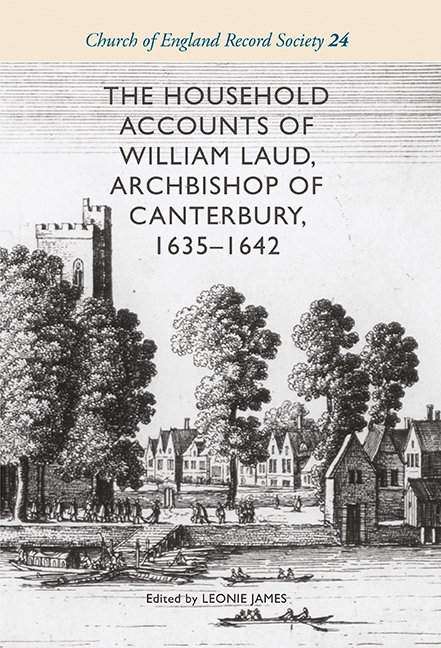 Appendix I - Glossary of names

The following glossary of names includes every identifiable person whose name appears in the manuscript, as denoted with an asterisk in the edition. Each name is accompanied by all variant spellings occurring in the accounts, with the standard spelling in bold. The standard spelling is that which has been commonly adopted by modern scholars or that which occurs most frequently in sources coeval with the accounts. Where the standard spelling of a name does not occur in the manuscript – either because the name is spelt differently there or because the person is identified only by their title, official rôle or surname – it is placed in square brackets below. A brief biographical profile of each person is given beneath their name, detailing the most significant formal office and title held in the period broadly synchronous with the accounts, as well as any known association with Laud.

Abbot, [Maurice] /Morris (1565–1642), merchant and politician. A founder member – and later, governor – of the East India Company, Abbot was the younger brother of George Abbot, Laud's predecessor. Resident in Coleman Street, London – a parish dominated by puritans – Abbot held a number of civic offices during his career, acting as alderman for Coleman Street ward from 1631 and as mayor of London in 1638.

Abbot /Abbott, [William] (fl. 1631–40), the saddler, who supplied the archbishop's stables with leather horse tack, including equipment such as bridles, reins, saddles and bits.

Abell, [William] (c . 1584 – c . 1655), vintner and local politician. Abell was appointed an alderman of London in 1636 and became master of the Company of Vintners a year later. In 1637, Abell was pricked as sheriff of London and it was in this capacity that he gained notoriety for his rôle in the violent arrest of the puritan minister, Henry Burton.

Alsbury / Alisbury / [Aylesbury], Thomas(c . 1580–1658), patron of mathematics and naval official. In 1625, Aylesbury was appointed surveyor-general and served as secretary to Buckingham during his tenure as lord high admiral. In addition to the office of master of requests, which he held from at least 1627, Aylesbury was commissioner for the Mint from 1635.