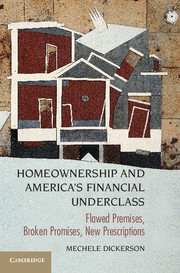 7 - The Burden of Home Buying While Black or Latino

After the Great Depression and again after World War II, the U.S. government engaged in aggressive efforts to increase overall homeownership rates. One early marketing and advertising effort, pushed by the powerful and politically influential real estate lobby, was the “Everyman’s Home” campaign. This campaign emphasized that home buying was not just for the doctor and lawyer: everyone, including the wage-earning plumber or the electrician, could become a homeowner in the United States. This certainly was true for some doctors, lawyers, and wage earners.

The Happy Homeownership Narrative neglects to mention that virtually all of the programs and initiatives the United States created to encourage and help Americans buy and remain in their homes, including the Everyman’s Home campaign, were designed to help white households. Until homeownership rates stalled in the 1990s, U.S. political leaders engaged in few major efforts to make homeownership accessible or affordable for blacks or Latinos.

Black renters who have tried to become homeowners have been deemed “mud people” who do not pay their bills, their neighborhoods have been called slums, and the loans that banks offer to them have been called “ghetto loans.” While such racist references and stereotypes might have been expected – and certainly would not have been shocking – in the 1940s or 1950s, loan officers referred to blacks using these derogatory terms in the 2000s, while they were steering blacks to higher cost mortgage products during the housing boom. Unlike the potential homeowners envisioned in the Everyman’s Home campaign, blacks and Latinos have always faced significant, and at times almost insurmountable, burdens when they have tried to buy homes – whether they are doctors, lawyers, plumbers, or electricians.