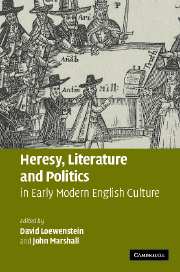 8 - The road to George Hill: the heretical dynamic of Winstanley's early prose

Early one morning during the conference held to commemorate the 350th anniversary of the Digger experiment, I went with two friends and colleagues, with whom I have long shared an enthusiasm for the radical prose of the mid-seventeenth century, to St. George's Hill, where Gerrard Winstanley and his comrades had sought to work together the common land, thus living off the common treasury of the earth. We would have wished to visit the site anyway, though a recent event lent the expedition a surprising frisson: radical activists of uncertain political affiliation had made a covert incursion into the area and had established a self-proclaimed Digger camp on land owned by a public utility company. On that cool, bright dawn we drove to a remarkably prosperous housing complex, reputedly the home to minor expatriate royalty and popular entertainers, and I encountered for the first time in England a walled and gated estate patrolled by security guards, who barred our way.

To my mild surprise, the guards let us through – we told them we were tourists, which, in a sense, was true – and we found the camp near the crest of the hill on a patch of muddy scrubland about the size of a tennis court. Those protesters who were awake made us welcome, and, after a brief explanation of our interests in Winstanley, we looked round the camp, noting the lines of symbolically planted flowers and vegetables adjacent to the sleeping heads of the “Diggers,” admiring the elegant and rather weighty memorial stone that had been smuggled onto the site, and, somewhat incongruously perhaps, signing a visitors' book.