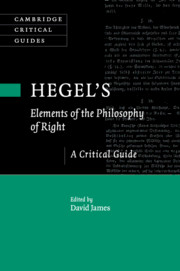 It is a commonplace that Hegel is a proponent of what he calls ‘ethical life’ (Sittlichkeit) and a critic of what he calls ‘morality’ (Moralität). Associated with this commonplace is the belief that the latter term is nothing but Hegel's disparaging nickname for the moral philosophies of Kant and Fichte. Common interpretations contrast Sittlichkeit – whose ordinary German sense implies the morality of custom and tradition – with Moralität as an individualistic and rationalistic stance, which might be critical of commonly accepted social practice. Hegel is supposed to be a proponent of the former and a foe of the latter. This consorts well with another commonplace: that Hegel is a social and political conservative, a foe of critical reason and also an enemy of individuality. Like many commonplace thoughts, both in philosophy and outside it, this one contains a grain of truth, but it oversimplifies and distorts that truth, and for this reason, when people allow such a commonplace to shape their thinking about the topic, it can badly mislead them.

The Development of Hegel's Conceptions of Morality and Ethical Life

The kernel of truth in the commonplace about Hegel on ethical life and morality is that, during his Jena period, Hegel adopted a critical attitude towards the philosophy of Fichte, who had just departed the university under a cloud, driven out by accusations of ‘atheism’. It is also true that philosophers in Hegel's day, and for a long time afterwards, tended to identify Kant's moral philosophy with that of Fichte, and to take Fichte's System of Ethics (1798) as the definitive statement of Kant's views on ethics as well as Fichte's. Hegel's expression of these criticisms, which is clearest in his early essay The Scientific Ways of Treating Natural Right (1802), does make use of the terms Moralität, as the name for a standpoint Hegel wants to transcend, and Sittlichkeit, as a higher standpoint (Werke 2: 459–468; NL, 75–82). Ethical life is the standpoint he identifies with the spirit of ancient Greece, celebrated in some of Hegel's unpublished earlier writings, in which there was supposed to be an immediate fusion of individuality and universality – individuals feel an immediate identity with their social order and its customary ways.