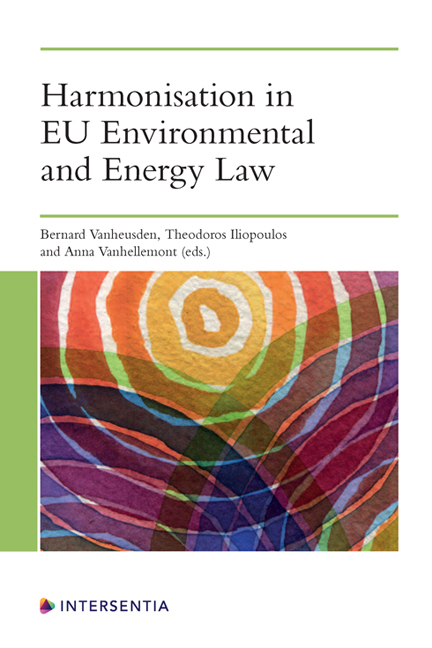 The tortuous path towards harmonisation in EU environmental and energy law constitutes a far-reaching effort, which shall be supported by far-reaching knowledge. The 2019 conference on ‘Harmonisation in environmental and energy law’ held at Hasselt University – and this book – have provided a one-stop-shop to gauge the notion of harmonisation and appraise its inherent meaning in the European Union (EU). According to Oxford’s Dictionary of Law, harmonisation of laws refers to the process whereby ‘member states of the EU make changes in their national laws, in accordance with Community legislation, to produce uniformity, particularly relating to commercial matters of common interest’. Thus, harmonisation per se ought not pursue any further aim than mere approximation between legal regimes. As is well known, however, this concept acquires a rather different meaning when put in the broader context of the EU’s environmental, energy (and climate) policies. Crucially, harmonisation here serves as a means to specific EU ends, namely: a) to achieve a high level of protection and improvement of the quality of the environment (art. 3(3) TEU, art. 37 of the EU Charter of Fundamental Rights); b) to achieve a general standard of environmental and climate protection while taking into account contextspecific differences across Member States (art. 191(2) TFEU); and c) to ensure the functioning of the energy market while fostering a low-carbon economy (art. 194 TFEU). Thus, harmonisation essentially results in a choice for the EU as to how to ensure the attainment of its environmental and energy policy objectives.

Against this backdrop, this book – as well as the 2019 conference from which it stems – aims to address the following fundamental question: has harmonisation in the EU delivered on the (increasingly urgent) needs to render mainstream and enhance the effectiveness of environmental and energy law?

The book has tried to answer this question by addressing the core substantial and methodological issues entailed in achieving a fully-fledged harmonised EU regime on environmental and energy matters. Furthermore, it has emphasised the heavy-lifting role of critical thinking, while progress on the implementation of the existing regime of EU law at the Member State level remains largely undermined by several political and, significantly, legal factors.