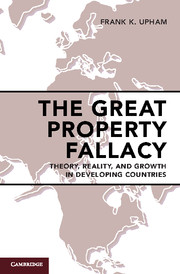 This book comes out of the confluence of my teaching and scholarship. I began teaching American property law over thirty years ago, not because of any interest in the subject, but because first-year Property was the course that Ohio State College of Law needed me to teach. I enjoyed teaching Property but my scholarship was focused on comparative law and specifically Japan and later China. Two developments in the late 1980s brought these parallel tracks into contact. First was the economic growth of China without a robust legal system. Second was the “second law and development movement” stimulated by the World Bank's adoption of neo-institutional economics and its focus on legal institutions as a prerequisite to growth. The immediate catalyst was a World Bank consultancy to the Lao People's Democratic Republic (PDR) to lecture on the reform of Laotian land law. I was not the Bank's first choice. They had appropriately hired someone with greater scholarly accomplishments in property law and especially in civilian property law. That person withdrew at the last minute, however, so I went in his stead.

I was allowed to structure the lectures on my own with two exceptions: I was to stress that land must be privately owned and that any land taken by eminent domain was to be compensated with the fair market value of the land. I was also, less formally, asked not to use the People's Republic of China (PRC) as a model for Laotian reforms. I was puzzled by these restrictions for several reasons. First, of course, was the fact that China was already the leading recent example of rapid economic growth. It was also, unlike, e.g., France, a foreign country whose land law I knew something about, but I was not so naïve that I did not understand (or think I understood) why the World Bank did not want China to be Lao's model. More troubling was the substance. Neither individualized private ownership of land nor fair market value compensation seemed to me to be necessary to growth or development. Indeed, America's own experience, much less that of China or Vietnam, contradicted both stipulations, and the ideological transformation that either would require of the Laotian government seemed too much to ask of a very poor country and irrelevant in terms of growth and development. Nonetheless, I toed the line.