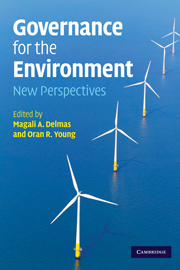 The study of environmental global governance has stimulated increasing interest in the ways in which non-state actors contribute to governance through agenda-setting and rule development, monitoring, and enforcement. The interest spans a range of scholarly fields, including law, economics, political science, and business studies, as demonstrated in various chapters throughout this volume. Our theories of international cooperation and global governance are only just beginning to uncover the complexity of transnational politics beyond the state, even as the demand for governance rises (Rosenau 2000; O'Neill, Balsiger, and VanDeveer 2004). Magali Delmas and Oran Young, in the Introduction to this volume, point out that this increased demand comes at a time when confidence in traditional governing institutions is waning. Given this paradoxical situation, it is not surprising to find people pressing for action by non-state actors to supplement or replace action by governments – or for those non-state actors to step in independently to supply the public goods that traditional governments are unable or unwilling to supply.

Governance is a “social function centered on efforts to steer societies or human groups away from collectively undesirable outcomes (e.g., the tragedy of the commons) and toward socially desirable outcomes (e.g., the maintenance of a benign climate system)’ (Young 1999a, Preface). We can view governance as an outcome of strategic bargaining among significant actors over particular issue areas or problems, in a process that is iterated over time, and that occurs within an institutional context (O'Neill, Balsiger, and VanDeveer 2004; Young, Chapter 1, this volume). In order to understand their interactions, we need good models of the actors, their strategies, their preferences, their identities – and their relative power.