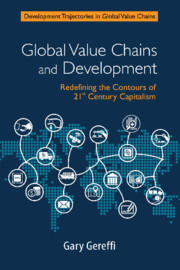 The global economy has changed in significant ways during the past several decades, and these changes are rooted in how the global economy is organized and governed. These transformations affect not only the flows of goods and services across national borders, but also the implications of these processes for how countries move up (or down) in the international system. The development strategies of countries today are affected to an unprecedented degree by how industries are organized, and this is reflected in a shift in theoretical frameworks from those centered around the legacies and actors of nation-states to a greater concern with supranational institutions and transnational organizations. Policy makers, managers, workers, social activists, and many other stakeholders in developed as well as developing nations need a firm understanding of how the contemporary global economy works if they hope to improve their position in it, or forestall an impending decline.

The topic of the global economy is inherently interdisciplinary. No single academic field can encompass it or afford to ignore it. Because of its vast scope, pundits who focus on the global economy are likely to be classified as academic interlopers; they run the risk of being too simplistic if they advance forceful hypotheses and too eclectic if they try to capture the full complexity of their topic. Scholars in this field thus have to master what economist Albert Hirschman has popularized as ‘the art of trespassing’ (Hirschman, 1981; Foxley et al., 1986).

The global economy can be studied at different levels of analysis. At the macro level are international organizations and regimes that establish rules and norms for the global community. These include institutions like the World Bank, the International Monetary Fund, the World Trade Organization, and the International Labor Organization, as well as regional integration schemes like the European Union and the North American Free Trade Agreement. These regimes combine both rules and resources, and hence they establish the broadest parameters within which the global economy operates.

At the meso level, the key building blocks for the global economy are countries and firms. Those scholars who take countries as their main analytical unit (as in the varieties of capitalism literature) provide an institutional perspective on the main, enduring features of national economies. The global economy is seen as the arena in which countries compete in different product markets.