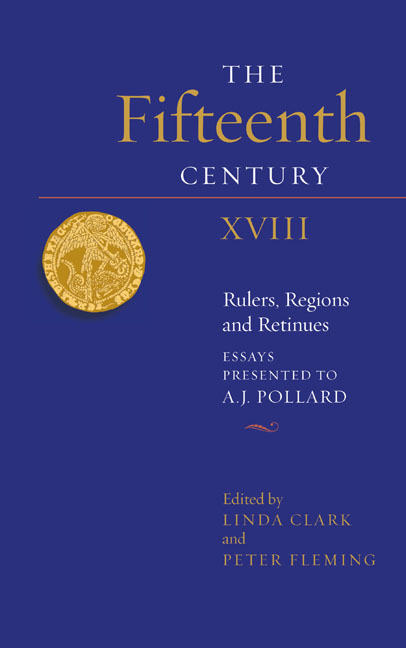 For someone who has contributed so much to the history of the north of England it may come as a surprise that Tony's own history began in Taunton. It was to his ‘local’ university that he went in 1960 – Bristol – already well known for its late medievalists. An enthusiasm for the period developed during his B.A. (1963), leading to a doctorate, ‘The Family of Talbot, Lords Talbot and Earls of Shrewsbury, 1387–1453’, supervised by Professor Charles Ross and completed in 1968. Even in these early days Tony effortlessly, as well as enthusiastically, combined political, military and social and economic history in his research and writing. He also demonstrated his capacity for multi-tasking, since his doctoral thesis was completed while he was working at the Further Education Staff College at Combe Lodge, Blagdon, writing strategy documents and producing reports. By this time too, he and Sandra were already a couple, Sandra having also taken a history degree at Bristol. In 1969 they moved to Middlesbrough upon Tony's appointment to a lectureship at what was soon to become Teesside Polytechnic. He little suspected at that point that he would remain at the same institution until his final retirement in 2008, being promoted to a chair in 1992, the year the Polytechnic became a University. But the south-west's loss was most certainly the north-east's gain.

Tony's first published article derived from his thesis, as did his first book, a pioneering study of John Talbot, the great war hero of the fifteenth-century phase of the Hundred Years’ War, and one of the first volumes to be selected by the Royal Historical Society for its ‘Studies in History’ series. But it was not too long before he turned his attention to the late medieval north. Throughout his career he has combined detailed study of the locality, especially of Richmondshire and the Tees Valley, with consideration of national politics. Most importantly, perhaps, he has combined the two, as in his seminal discussion of the ‘tyranny’ of Richard III, implemented through the implantation of trusted northerners into the south in order to maintain the regime of a usurper. In 1990 Tony's magisterial study of the north-east during the Wars of the Roses was published by Oxford University Press. Six years later, he edited a collection of articles about Richard III and the north. His early work on the Neville line descended from the marriage of the first earl of Westmorland to Joan Beaufort led in due course to a full biography of Warwick the Kingmaker in 2007. Few other historians have been able to combine as skilfully as Tony has done the study of personality, politics and place.