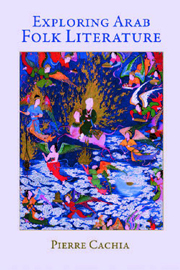 It is a signal honour to have been invited to write the Foreword to this collection of papers by the doyen of Arabic folk literature, Professor Pierre Cachia, the ‘honorary Sa‘īdī’. Although now well into his eighties, Professor Cachia still continues to produce perceptive editions, translations, commentaries and analyses of folk literature as practiced in his beloved Egypt. All who toil in this and related fields sincerely hope that, despite the infirmities of age, he will continue to do so for many years to come.

The present collection gathers together some of Professor Cachia's most important journal-length contributions to Arabic folk literature and allied subjects, published over roughly the last forty years. Although only two of the twenty articles have not been previously published, collecting them together in a single volume is a great service to other researchers, many of whom may not have access to all of the journals in which they originally came out. While Professor Cachia's interest in folk literature is long-standing, he has never been a one-club golfer, and he has made significant contributions to Classical Arabic Literature and Arabic linguistics over his long career. In fact, it is his vast hinterland of Arabic linguistic and literary knowledge that is one of the main reasons why his contributions in the field of popular culture are so authoritative: the breadth and depth of his scholarship enables him to bring a sense of context and proportion, and a cultural understanding of both high culture and the grass roots which nowadays is rare in Arabic studies, in which the trend, as in other disciplines, is to specialise in an ever narrower field and say more and more about less and less.