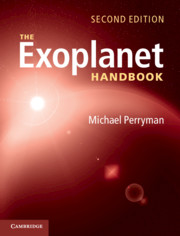 PLANETARY SYSTEMS, the solar system amongst them, are believed to form as inevitable and common byproducts of star formation. For orientation, an overview of the processes described in this chapter is as follows.

The present paradigm starts with star formation in molecular clouds. Brown dwarfs are formed as the lowmass tail of this process, although some may be formed as a high-mass tail of planet formation. Gas and dust in the collapsing molecular cloud which does not fall directly onto the protostar resides in a relatively long-lived accretion disk which provides the environment for the subsequent stages of planet formation. Terrestrial-mass planets are formed within the disk through the progressive agglomeration of material denoted, as it grows in size, as dust, rocks, planetesimals and protoplanets. A similar process typically occurring further out in the disk results in the cores of giant planets, which then gravitationally accumulate their mantles of ice and/or gas.

As the planet-forming bodies grow in mass, growth and dynamics become more dominated by gravitational interactions. Towards the final phases, and before the remaining gas is lost through accretion or dispersal, the gas provides a viscous medium at least partially responsible for planetary migration. Some migration also occurs during these later stages as a result of gravitational scattering between the (proto-)planets and the residual sea of planetesimals. The final structural stabilisation of the planetary system may be affected by planet–planet interactions, until a configuration emerges which may be dynamically stable over billions of years.

The current observational data for exoplanet systems is broadly compatible with this overall picture. Other constraints come from a substantial body of detailed observations of the solar system (Chapter 12).

An understanding of howplanets formis essential in understanding and interpreting the considerable range of observed planetary system architectures and dynamics.

Today, the most widely considered solar nebula theory holds that planet formation in the solar system, and by inference in other exoplanet systems, follows on from the process of star formation and accretion disk formation, through the agglomeration of residual material as the protoplanetary disk collapses and evolves.