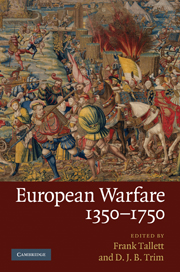 The role of war in the development of later medieval and early-modern western European states has been hotly debated and yet remains curiously out of focus. At one extreme stand those historians and historical sociologists who have argued that military competition between states was the main driver of state development. At the other stand those who think war hindered or perverted processes of state formation based on the rule of law, the realisation of an ideal model of sovereignty, or the construction of social coalitions based on religious or moral interests. Yet neither group has found the means to engage very directly with the other's arguments, proceeding mostly by assertion and counter-assertion. What measurable evidence has been produced for the importance of one force or another has tended to be of the sort that can only be weighed on one side of the argument or the other, such as the increasing size of armed forces or the increasing volume of litigation.

Detailed study of the impact of war on individual countries, meanwhile, has served to demonstrate the immense variety of experience between and even within different polities. This has tended to make historians sceptical of the models built by sociologists to classify polities by social structure, political tradition, and military engagement, and thus explain their different constitutional trajectories. Michael Roberts' ‘military revolution’, once a convenient link between changes in military technology and organisation and the changes in government needed to sustain and exploit them, has mutated under intensive scrutiny either into a series of smaller military revolutions or into one so long-lasting and multi-faceted that it is hard to link to specific political changes.